I’m back with meeting updates! A lot has happened over the past two months, both on City Council and for me personally.

In case you missed it, I announced my re-election campaign, and I need your support! Please consider making a contribution in any amount.

And as many of you know, I got married at the end of October. I appreciate all of the well wishes. 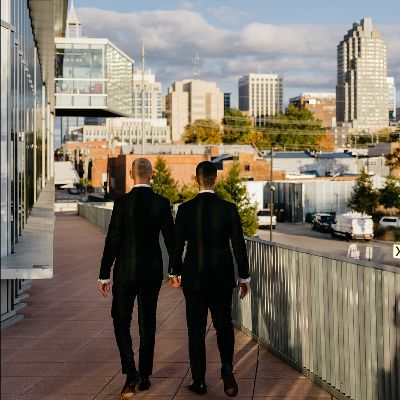 Now back to business!

1. We received an update on our short-term rental permit program. As you might recall, earlier this year we lifted the functional ban on short-term rentals and came up with a new permitting program to allow the industry to work in Raleigh. As part of the program, we are to receive updates every 6 months. At our first 6-month update, we learned that there have been 152 permits approved and 41 permits pending. The city received only one complaint of a short term rental operating without a permit, and the subject property has since come into compliance and the case was closed. Overall, the program is going well and we will receive another update in 6 months.

2. We approved two big text changes to modify how bike lanes are constructed and to facilitate a new zoning district (Transit Overlay District (TOD)). The bike lane text change relocates in-street conventional bike lanes to behind the curb, creating more protection and safety. The TOD is a zoning tool that will be applied along the upcoming Bus Rapid Transit (BRT) corridors, eliminating parking requirements and adding density bonuses for affordable housing and employment uses.

3. We joined Wake County in adopting a nondiscrimination ordinance that prohibits discrimination in public accommodations and private employment. This was an overdue step that sends a strong message that all are welcome in our city. I appreciate the patience and grace of many, as I navigated advancing this issue during the past year.

4. We received an update on our efforts to review calls for service to our police and fire departments and to explore options for alternative responses. We began this process in September 2020, after a summer where we heard repeatedly that it’s time to reimagine how we care for the community. This work is proceeding in 4 phases; phase 1 was to collect and analyze the 911 call data; phase 2 was to identify alternative response strategies; phase 3 is to develop pilot programs for alternative responses; and phase 4 is to evaluate the pilot programs and then implement on a permanent basis. Phases 1 and 2 are complete.  Staff has come up with 5 potential pilot programs:

Phases 3 and 4 are next: implementing these pilot programs, reviewing and making permanent.

1. We reviewed a draft ordinance and community outreach plan for our Accessory Commercial Units (ACU) text change. In June, we authorized staff to draft a text change that would allow ACUs in residential zoning districts. An ACU is a business located on the same property as a residence. Unlike a standalone operation, the business must be clearly secondary and subordinate to the residential structure and use on the site. ACUs were relatively common before modern zoning laws physically separated most residential and commercial development and exist today in places such as Portland, Memphis, and New Orleans. In recent years, ACUs have gained in popularity as a means to introduce retail and other opportunities into historically isolated and disinvested communities. The goal of the text change is to allow more opportunities for shopping and services within walking distance of neighborhoods, reducing car-dependency.

You can read more about the proposed change here, including how you can weigh in.

2. We allocated $1 million of American Rescue Plan Act (ARPA) funds to agencies that assist with one of five targeted groups: elderly, youth, individuals with disabilities, individuals with substance abuse issues, and people experiencing homelessness. The groups who were funded were recommended by our Human Relations Commission.

3. We reviewed options for creating a Midtown to Downtown express transit service. It would operate from the Raleigh Convention Center and Museums of History and Natural Sciences with limited stops to midtown, 7 days per week, with proposed service time 7 AM to 9 PM. We asked staff to consider expanding the hours of service on the weekends and to identify businesses who would potentially sponsor. Overall, once approved this pilot service would provide a necessary connection between Raleigh’s two major urban centers, connecting hotels and businesses which reduces car-dependency and greatly helps the Convention Center attract visitors. The pilot program would be temporary, because in 2025 the Wake County Transit Plan will implement permanent high frequency service every 15 mins from Downtown to Midtown.

4. We allocated reserve funding to begin construction of the Dix Park Play Plaza. The advance funds will allow site work to commence and procure engineering services.

Our final City Council meetings for the year are next Tuesday, December 7, 2021 at 1 PM and 7 PM.